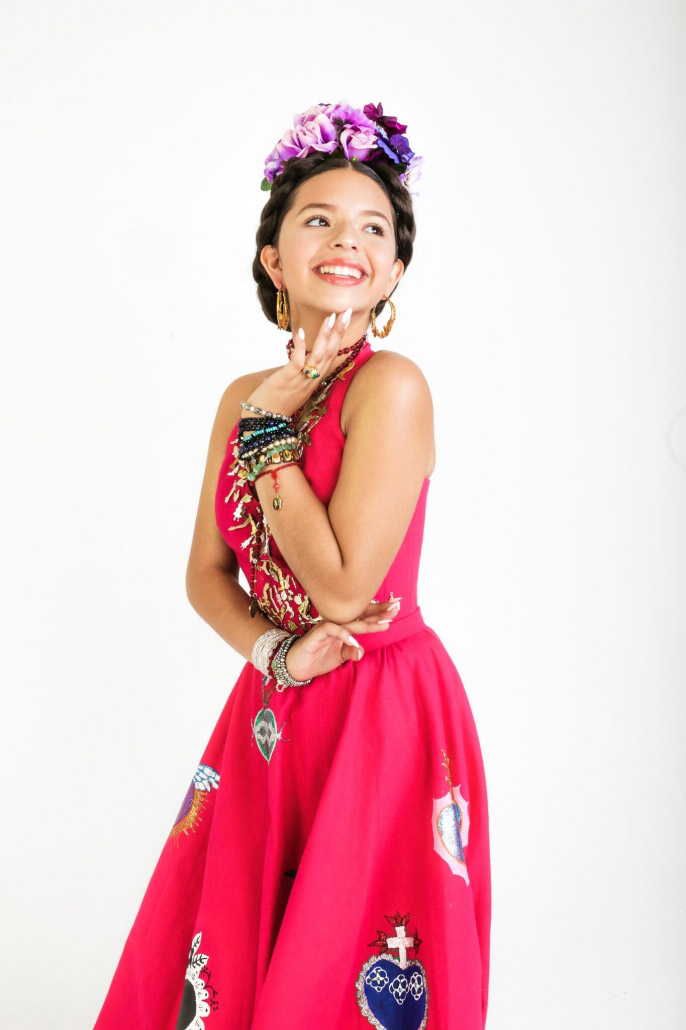 Angela Aguilar proudly embraces her family’s musical legacy. Her grandfather was the iconic Antonio Aguilar, the late Mexican singer. Her grandmother is the legendary singer/actress Flor Silvestre and her father is the multiple Grammywinning Pepe Aguilar.

At 15, Angela is a 2019 Grammy nominee. In 2018, she was a Latin Grammy nominee thanks to years of honing in on her craft and becoming an established recording artist in her own right. She credits her family for guiding her career as a new generation of Regional Mexican singers boosting the genre with fresh, modern and traditional musical styles.

The Los Angeles-born teenager, who excels academically and aces her algebra exams regularly, has Bruno Mars, Lady Gaga and Queen, among others, on her personal playlists these days. She counts the late Spanish singer Rocío Dúrcal as one of her favorite singers ever. But it’s her family’s legendary musical contributions, she says, that taught her most of what she knows today as an entertainer with fans throughout the world. And it all started when she was just a toddler.

At 3, Angela was already touring with her family. A pivotal moment, she recalls, happened during those shows and it changed everything.

“I was very tiny and my dad put us on stage out of nowhere, even if we didn’t say anything,” Ángela says. “There was this one time, very unexpected, when we were singing a song …. my dad put the little microphone on me and I sang one part of the song, which is, ‘Si vieras.’ It was a very crazy moment for me and it’s funny because that moment got captured. When you’re 3 you do stuff because you want to, like you don’t really care about anything else and that’s like a great reminder that that is what’s meant for me and this is what I want to do.”

As a third generation recording artist, Ángela grew up straddling two cultures; her Mexican heritage and her American side. She knew that the expectations of fans and others was going to be very real if she pursued a career in music. She was determined to work hard, learn and keep an open mind with her family by her side and a father who has always been by her side. She was raised, she says, to stay focused on her passions and craft.

In 2018, Angela’s performance of “La Llorona” during a live telecast of the Latin Grammy Awards was seen in more than 80 countries. The global audience witnessed a young Ángela transform into a young woman with an illuminating stage presence and her most prized instrument: her voice, catapulting her into a league of young, independent and bold leading female acts in Latin music.

Angela, who is currently working on a new album for 2019 as a follow up to Primero Soy Mexicana, is also nominated for a 2019 Grammy for best regional Mexican music album.

Besides staying on top of her academic work, recording music, touring and finding time to spend with family and friends, Ángela uses her high-profile platforms to speak about voting rights and voter registration. “I can’t vote now, but I will promote it,” Ángela says. “Young people can pre-register. We have voting sign-ups at our concerts in the U.S. There are apps to help people sign up to vote, so no excuses.”

Well versed in a variety of genres, Ángela says that Regional Mexican is the genre the feels the most connected to, but hints that she is always thinking about new ways of expressing herself musically as she grows artistically.

“I’m in it for the long recording takes, the crying because I can’t reach the notes that I know that I can reach,” Ángela says. “The nerves of going up in front of people and changing my mind, making decisions and becoming a woman while I also become an artist. It’s just a lot, but my main goal here is to grow as a person and a musician.”

Music is her life, Ángela says, but her family is the biggest blessing that she never takes for granted. It’s that family foundation that is seen through the patriarch of the Aguilar family: Pepe, who produced her album and guides his daughter in the music business. The most common question she gets about her father is usually about how she feels having a famous dad.

“It feels like he’s my dad and that’s it,” Ángela says. “Of course he’s a businessman … but I know that he knows me and I know he’s doing the best for me and that’s really cool. Dad is looking out for me.”