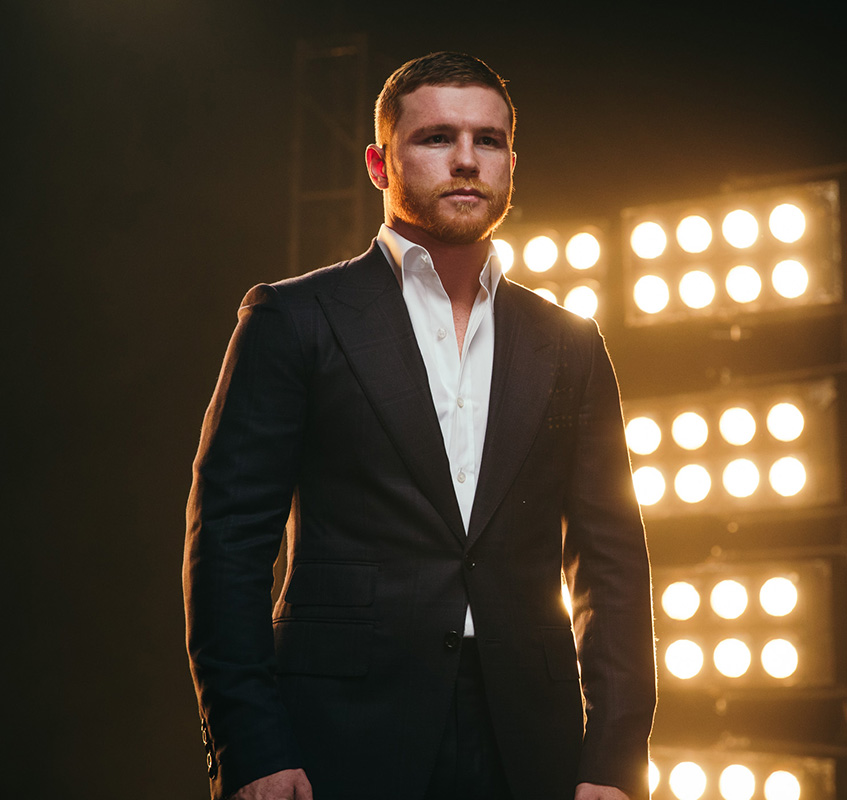 With his red hair and freckles, baby-faced Canelo Alvarez may not appear to be your typical Mexican warrior. However, one look at him in the ring makes it clear that this hard-hitting four- division world champion is following firmly in the footsteps of Mexican greats such as Ruben “Puas” Olivares, Salvador “Sal” Sanchez, Julio Cesar “J.C.” Chavez, Marco Antonio “Baby Faced Assassin” Barrera and Erik “El Terrible” Morales. This makes him not only one of the most popular young fighters in his home country, but one in demand around the entire Hispanic fight community.

Canelo, who is just 28 years old, amazingly made his pro debut on October 29, 2005, just three months after his 15th birthday. He made an immediate impression, stopping Abraham Gonzalez in four rounds in a fight that took place in Tonala, Jalisco, Mexico.

Three more wins followed in rapid succession for Canelo before he was extended to a four-round draw with Jorge Juarez in June of 2006. There have been no more blemishes on his record since then as Canelo won 11 of his next 13 bouts by knockout, winning the Jalisco state welterweight title in the process.

2008 was the biggest year for Canelo yet, as he went 8-0 with 4 knockouts while earning the WBA Fedecentro welterweight title with a 12-round decision win over previously unbeaten Gabriel Martinez in April of the previous year. That bout was also his US television debut, one that saw him garner plenty of fans for his exciting style.

In August, Canelo defended his title with a ten-round unanimous decision win over veteran Carlos Adan Jerez. On October 24, Canelo made his US debut with a clear-cut 10-round win over talented Larry Mosley at the Morongo Casino Resort & Spa in Cabazon, California. Canelo finished 2008 in style with a first-round TKO of 16-1 Raul Pinzon on December 5. He then kicked off his 2009 campaign with a first-round TKO of Antonio Fitch on January 17 that earned him the vacant NABF welterweight title.

After that, Canelo kept up a ferocious fight pace with six more bouts in 2009. His streak of destruction after the Fitch fight continued on February 21 when he halted unbeaten Euri Gonzalez in 11 rounds to win the WBO Latino title. Less than two months later, he defended his NABF belt with a 10th-round stoppage of highly regarded Michel Rosales. Victories over Jeferson Concalo (KO9), Marat Khuzeev (KO2) and Carlos Herrera (TKO1) followed in June, August, and September, respectively, upping his pro record to 29-0-1 with 22 KOs. He finished up the year on December 5 with a near shutout 12-round decision win over Lanardo Tyner. In January of 2010, Canelo signed a promotional contract with Golden Boy Promotions, kicking off a relationship that helped lead him to a world title.

He defended his NABF title with a third-round knockout of Brian Camechis in March of 2010, halted highly-ranked contender Jose Miguel Cotto in nine rounds in May of that year and stopped 26-1 Luciano Cuello in six rounds for the vacant WBC silver junior middleweight title on July 10.

On September 18, 2010, Canelo returned to the ring at Los Angeles’ STAPLES Center and became only the second man to ever knock out former welterweight champion Carlos Baldomir as he finished him in the sixth round. Canelo finished off his breakout year on December 4 with a 12-round unanimous decision win over Lovemore N’dou.

On March 5, Canelo had his first bout of 2011. He was in top-notch form as he accomplished his dream of becoming a world champion by winning the vacant WBC junior middleweight title with a near shutout victory against British contender Matthew Hatton.

Canelo defended his crown for the first time on June 18 against another battlin’ Brit, Sheffield’s Ryan Rhodes. He ended the exciting bout in style, halting the longtime contender in the 12th round of a bout in Mexico that captivated the nation and set viewing records across the country.

The next stop on Canelo’s amazing ride took place on September 17th, when he stopped Alfonso Gomez in six rounds. He then closed out 2011 with a fifth-round stoppage of former world champion Kermit Cintron.

On May 5, 2012, Canelo defended his belt for the fourth time when he faced future Hall of Famer “Sugar” Shane Mosley as part of the “Ring Kings: Mayweather vs. Cotto” pay-per-view telecast. Even though the fight lasted 12 rounds, the popular Mexican showed the aging veteran the road to retirement, winning via unanimous decision. Once again, young Alvarez made his country proud while continuing his rise to stardom.

The victory over Mosley set up a September 15 showdown with breakout star Josesito Lopez, and despite Lopez’ game effort, Alvarez’ power and strength were too much, as he knocked his opponent down three times before ending the bout with a fifth round TKO.

Next, boxing’s most popular phenom continued on the path to superstardom with a 12 round unanimous decision over WBA champion Austin Trout on May 4, 2013 in front of over 39,000 fans at the Alamodome in San Antonio, Texas. The win proved Alvarez’ supremacy at 154 pounds and also made it clear that he was a bonafide ticket seller wherever he decided to fight. Now the only thing left for Alvarez to prove is his place on the pound-for-pound list, and on September 14, 2013, against the man on top of that list – Floyd Mayweather – he gave a stellar effort before falling short of victory for the first time via 12-round majority decision. The fight ended up being not just the biggest of the year, but the highest grossing bout of all time and the most watched boxing event ever on Mexican television, proving that for Canelo, the best is still yet to come.

On March 8, 2014, Alvarez returned to the ring with a 10th-round technical knockout win over fellow Mexican warrior Alfredo Angulo at the MGM Grand in Las Vegas, and the Fight Capital of the World was also the site for Canelo’s second win of that year, as he won a hard-fought split decision over Cuba’s Erislandy Lara.

Returning to battle on May 9, 2015, Alvarez delivered one of the most impressive performances of his career against one of his most dangerous foes, as he knocked out Texas slugger James “Mandingo Warrior” Kirkland in the third round. Later that year on November 21, 2015, Alvarez took yet another impressive step in his career when he scored a 12-round unanimous decision victory against Miguel Cotto to win the lineal, Ring, and WBC Middleweight titles.

In the following year on May 7, 2016, Alvarez defended his titles against the quick-handed Amir Khan with a spectacular sixth-round one-punch knockout that earned him the Knockout of the Year. On September 17, 2016, Canelo returned to the junior middleweight division to take on Liam “Beefy” Smith to win the WBO title. With this victory, Canelo became a four-time two division champion.

On May 6, 2017, in a highly anticipated matchup between two of Mexico’s brightest stars, Canelo scored an impressive and dominant 12-round unanimous decision against Julio Cesar Chavez, Jr. in a huge pay-per-view event.

Immediately after the fight, with sweat still dripping from his victory, Alvarez announced his following opponent: WBC, WBA, IBF and IBO Middleweight champion Gennady “GGG” Golovkin. Canelo fought to a controversial split draw in September 2017 what was the biggest boxing event of the year.

Canelo and Golden Boy Promotions then signed a historic partnership with DAZN, which kicked off on Dec. 15, 2018 when he made history by becoming a three-division world champion against Rocky Fielding in his New York City debut at Madison Square Garden.

In 2019, Canelo continued in his efforts to ensure that his name remains in the history books by fighting and beating IBF Middleweight World Champion Daniel “Miracle Man” Jacobs. On November 2, 2019 Canelo fought WBO light heavyweight titleholder Sergey Kovalev and won the bout via an eleventh –round KO to become a four-division world champion. He joined Thomas Hearns, Sugar Ray Leonard, and Mike McCallum as the only former junior middleweight champions in history to win a title at light heavyweight. Among them, only Canelo and Hearns established their careers at welterweight and claimed the title at the 175-pound limit.

For his 2019 campaign, he was named the fighter of the year by The Ring Magazine, ESPN, Sports Illustrated, and the Boxing Writers Association of America.