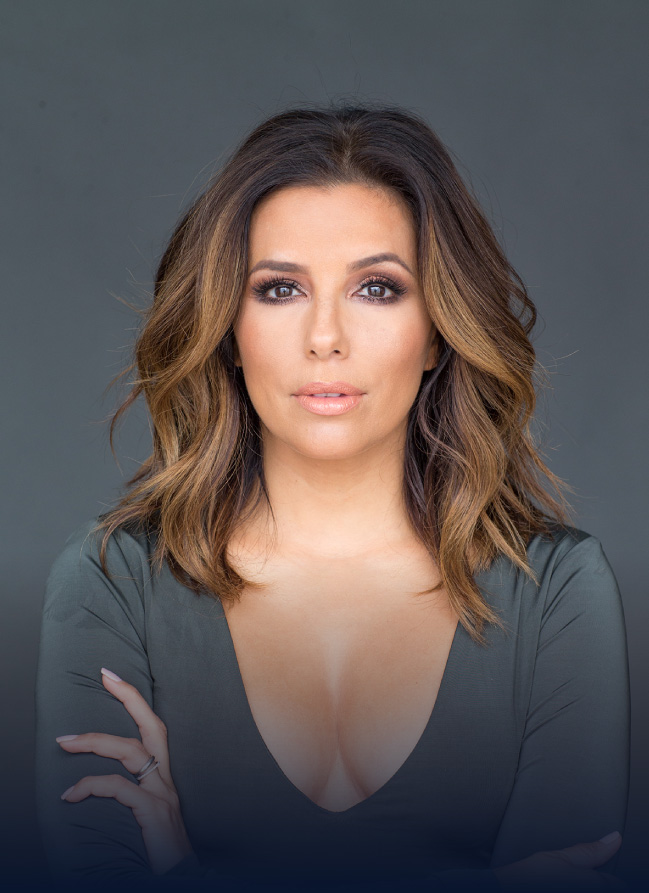 Having worked consistently in Hollywood for over 20 years, Eva Longoria has cemented herself as an industry staple known for her work both in front of and behind the camera. Once described by WarnerMedia’s Chief Enterprise Inclusion Officer Christy Haubegger as “subversive in the best way” to AdWeek, Longoria continues to hone her craft, seek new projects, and expand opportunities for others by paving the way for future women and minority producers, directors and industry leaders in Hollywood and beyond.

Longoria captured audiences with her starring role in the hit ABC series Desperate Housewives for eight seasons opposite Teri Hatcher, Felicity Huffman, and Marcia Cross. It is for her work on the series that earned her and her castmates SAG Awards for “Outstanding Performance by an Ensemble in a Comedy Series” in 2005 and 2006. In 2006, she was nominated for a Golden Globe Award and named the ALMA Awards’ Person of the Year. Longoria was most recently seen on the big screen in the jazz era film Sylvie’s Love opposite Tessa Thompson. From writer-director Eugene Ashe and producer Nnamdi Asomugha, the film premiered at the 2020 Sundance Film Festival, where it was acquired by Amazon Studios. Other past acting credits include Quibi’s Flipped, Grand Hotel, Dora and the Lost City of Gold, BoJack Horseman, Dog Days, Overboard, Jane the Virgin, Type A, Empire, Decline and Fall, Un Cuento de Circo & A Love Song, Maya & Marty, Devious Maids, Lowriders, Telenovela, Visions, Any Day, Brooklyn Nine-Nine, Frontera, Mother Up!, The Simpsons, Welcome to the Family, Crazy Kind of Love, A Dark Truth, The Baytown Outlaws, Foodfight!, For Greater Glory: The True Story of Cristiada, Arthur Christmas, Without Men, Children’s Hospital, Lower Learning, Over Her Dead Body, The Heartbreak Kid, The Sentinel, George Lopez, Harsh Times, Dragnet, The Dead Will Tell, The Young and the Restless, General Hospital and Beverly Hills 90210.

With past credits including the ESPN 30 for 30 documentary Versus as well as episodes of The Expanding Universe of Ashley Garcia, Grand Hotel, Black-ish, The Mick, LA to Vegas, Jane the Virgin, Telenovela, Devious Maids, Latinos Living the Dream, and the short films Out of the Blue and A Proper Send-Off, Longoria has long established herself as one of the most in-demand television directors. She is currently preparing to make her feature film directing debut with two projects on the immediate horizon. Longoria is scheduled to direct the workplace comedy 24/7 and Flamin’ Hot, the highly anticipated Fox Searchlight biopic about the creator of the spicy Flamin’ Hot Cheetos snack for which Longoria beat out multiple high profile film directors vying for the job. In addition to directing 24/7 for Universal Pictures, Longoria will star opposite Kerry Washington and serve as an executive producer. Longoria will now be the first Latina to direct two major studio films back to back. According to Stacy Smith’s USC Latino Inclusion Study, which was published in 2019, only one Latina in the past 12 years has directed one of the top 1,200 grossing films.

Through her production company UnbeliEVAble Entertainment, Longoria has become one the most significant trailblazers and was recently wooed into a groundbreaking production deal with 20th Century Fox Television and Universal Pictures, the largest deal ever made with a Latina. Founded in 2005, the company actively chooses purposeful projects that accurately represent the stories of the Latinx and other underrepresented communities. The ABC series Grand Hotel, was the first major network drama to feature a predominately Latinx cast and female directors. It was recently announced that UnbeliEVAble Entertainment will partner with Forest Whitaker’s Significant Productions to produce Chicano, a multi-generational drama centering on a Mexican-American family that immigrates to Los Angeles in pursuit of the American Dream, for ABC. Longoria and her team will also soon be producing the HBO film A Class Apart, which tells the incredible true story of a group of

Mexican Americans fighting for their civil rights during a landmark case that leads all the way to the Supreme Court. The company’s past credits include the Emmy Award nominated Netflix documentary Reversing Roe, Lionsgate’s John Wick, NBC’s comedy Telenovela, and the American Latino Media Arts (ALMA) Awards. Longoria’s other past producing credits include Devious Maids, Mother Up! and Ready for Love.

Recently named by People Magazine as one of the Women Changing the World, Longoria is a dedicated philanthropist and activist who has consistently lent her voice to the issues she is passionate about, ranging from immigration to reproductive rights. In 2006, she co-founded the nonprofit Eva’s Heroes, which operates out of San Antonio, Texas and is dedicated to enriching the lives of those with intellectual special needs by providing an inclusive setting built on the tenets of: interact, grow, learn and love. Committed to empowering Latinas everywhere, Longoria established the Eva Longoria Foundation (ELF) in 2012 to help Latinas build better futures for themselves and their families through educational programs, scholarships, mentorship and entrepreneurship. In addition to her own foundations, Longoria is a founding member of Time’s Up with Reese Witherspoon, Natalie Portman and other leading Hollywood women; the spokesperson for Padres Contra el Cancer, a nonprofit organization that is committed to improving the quality of life for Latino children with cancer and their families; launched The MACRO Episodic Lab Powered by The Black List with Charles D. King, Lena Waithe and Franklin Leonard to discover, support and empower storytellers of color who typically do not have access to the traditional Hollywood system; and the co-founder of the Latino Victory Fund, which is a movement that builds power in the Latinx community to ensure their voices and values are reflected at every level of government and in the policies that drive our country forward. In response to President Trump’s immigration policies, Longoria used the birth announcement of her son to bring awareness to families who have been separated at the border. Following the El Paso, Texas shootings and Mississippi ICE raids, Longoria joined forces with America Ferrera, Diane Guerrero and Mónica Ramírez to organize #QueridaFamiliaLatina, a letter of solidarity signed by over 200 Latinx artists and community leaders that was published in The New York Times, La Opinión, El Nuevo Herald and El Diario. With Henry Muñoz she launched Momento Latino, which is a growing coalition of Latinx activists, leaders, artists and allies lifting their voices and pushing for change for the community with so many inequities exacerbated by the COVID-19 pandemic. Together with America Ferrera, Alex Martínez Kondracke, Carmen Perez, Christy Haubegger, Elsa Collins, Jess Morales Rocketto, Mónica Ramírez, Olga Segura, and Stephanie Valencia, Longoria recently launched She Se Puede, which is a new digital lifestyle community and media platform to inspire, affirm, and inform Latinas to leverage their power in a way that transforms their lives, families and community.

Longoria has served as a Global Brand Ambassador for L’Oreal Paris for over 15 years. A frequent director of the brand’s commercials, she recently upped the ante by self-directing the first ever hair color TV commercial created at home on a smartphone during the COVID-19 pandemic. She also currently has a shoe line with Eobuwie and Modivo sold in Eastern Europe, and is a New York Times bestselling author for her cookbook Eva’s Kitchen.

While working full time on Desperate Housewives, Longoria earned her master’s degree in Chicano Studies from California State University, Northridge in 2013. She wrote her thesis on “Success STEMS from Diversity: The Value of Latinas in STEM Careers.” She received her Bachelor of Science in kinesiology at Texas A&M University-Kingsville.

A native of Texas, Longoria currently resides in Los Angeles with her family.