What does stock market growth mean for U.S. Latinos?

For three months, much of America has been dealing with trying to slow the advance of the coronavirus pandemic. That means Americans haven’t been able to buy things, go on holiday, eat at restaurants or, attend special events including professional sports. So, how is it that the stock market is making headlines, like this just ten days ago, “The Dow Jones Industrial Average Jumped 339 Points.”

This issue of L’ATTITUDE Network News takes a close look at the disconnect between the reported good news about the stock market and the continued bad news in the American economy most are experiencing.

Who benefits from stock market growth

Average American citizens, including U.S. Latinos, are not experiencing a rebounding economy.

What is the tax cuts connection

You may remember what has been referred to as “the Trump tax cuts” that were going to put money into the hands of the working class. A recent analysis provided a different picture of the results of those tax cuts. For example, by 2027, 82.8% of that tax law’s benefits will go to the top 1%. In fact, those tax cuts have helped billionaires pay a lower rate than the working class for the first time in history.

As a result of fiscal policies and government economic support that has enabled large corporations to profit in various ways, such as investing in stock buy-backs, our country’s income disparity.

What is the real state of our economy?

Let’s start with a look at unemployment because a robust economy requires people working who then have income they can spend. According to the U.S. Bureau of Labor Statistics, the latest unemployment figure is 11.1%. However, among U.S. Latinos the unemployment rate was 14.5%.

The unemployment rate among U.S. Latino men is 12.8% and among U.S. Latinas it is 15.3%. That is because in May, a record 19% of Latina workers were unemployed. The gap between the jobless rates of Latinas and white men was the largest: 8.3 percentage points. U.S. Latinas have experienced heavy fallout from coronavirus because, according to the Bureau of Labor Statistics, they held nearly a third of all service jobs in 2019, and were also overrepresented in sales jobs, holding 29 percent of them last year.

It also appears likely that many Latinas who did not get laid off are considered “essential workers,” which puts them on the front lines and at a higher risk of contracting COVID-19. Latinos (men and women) make up 20 percent of the essential workers in transportation and warehousing, and 40 percent of essential workers who clean and maintain industrial, commercial, and residential buildings.

Randy Albelda, a labor economist at the University of Massachusetts in Boston, described the situation as “The worst of all worlds. [Latinas] are in these industries where they’ve been laid off in droves, and they’re also overrepresented among front-line workers.”

However, across the economy as a whole, most of the job gains have gone to white workers, according to the Center for Public Integrity. The highest unemployment rate of any racial or gender group by far is among U.S. Latinas.

A recent ad in the Wall Street Journal about L’ATTITUDE 2020 calls attention to these issues that will be addressed as part of the L’ATTITUDE 2020 live-cast event. The entire four-day agenda is focused on the Restart and Rebound of the New Mainstream Economy. This is essential information for all Latinos, as well as all other Americans who are concerned about how our country can recover from the economic impact of the pandemic. 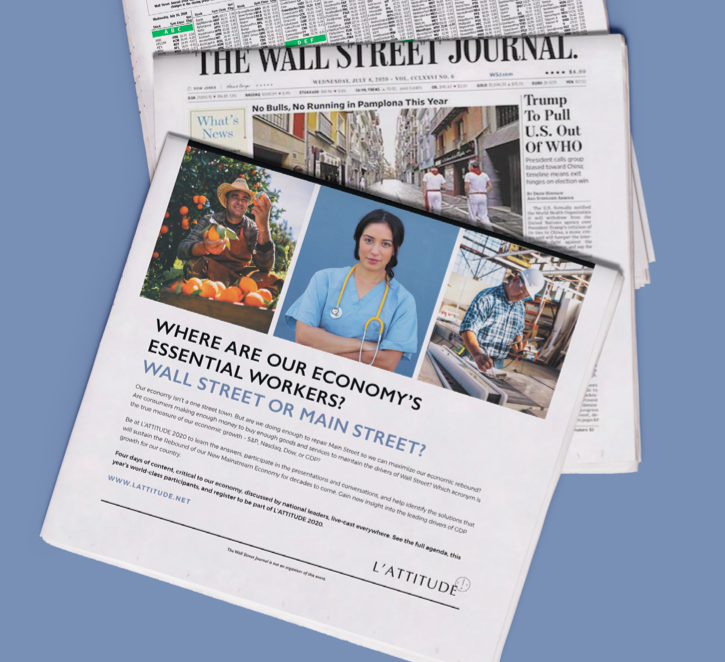 The New York Fed publishes its Weekly Economic Index (WEI) and the week of July 22 AXIOS published the most recent data that indicates the economy is getting worse after a climb in April and May.

Representing 10 daily and weekly data covering consumer behavior, the labor market, and production, the WEI represents a compiled view of what is happening. Based on the recent Index, if the current trajectory were to continue, the U.S. GDP is reportedly poised to sink by 7% in the third quarter, and decline year over year for the third straight quarter.

AXIOS also reported that according to Homebase, the number of employees returning to work at small and medium-sized businesses declined by at least 5% from early June to mid-July, also pointing to a slowing economy. TSA travel data showed the first weekly decline of people passing through airport checkpoints since April.

The housing market, however, has continued to show strength by the jump in home mortgages accompanied by a decline in applications for the government’s payment suspension program. Some have cautioned that this data may actually demonstrate a growing divide between the wealthy few and the rest of America.

That divide is brought into sharper focus by an analysis of the Median Weekly Earnings in 2020, prior to the pandemic, in the U.S. That analysis showed that median earnings for U.S. Latinos in the 25 to 54 year old segment were $834, compared to $819 among African Americans, and $1040 for non-Latino White Americans. Those earnings compare to the average weekly earnings of the top 1% of $25,326.

At the same time, this average earnings disparity and the limited access to capital made available to U.S. Latinos, hasn’t prevented this cohort from taking the lead in the New Mainstream Economy. The U.S. Latino cohort’s $2.3 trillion in GDP ranks as the fastest growing among all fully developed economies in the world. U.S. Latino consumption has been growing 72% faster than that of non-Latinos. U.S. Latinos have accounted for 80% of all the net new businesses formed during the past decade.

It can’t be forgotten that U.S. Latinos make up between 21% and 40% of all Essential Workers in our country, depending on the sector. The robust economic growth of this cohort that has been leading the growth of our country’s economy since the Great Recession, combined with being the youngest and fastest growing cohort in America, in addition to its criticality for many of our country’s most essential services, makes U.S. Latinos also essential to the Restart and Rebound of our economy.

A Barron's ad explains that fact and highlights the first National Latino Economic Blueprint that will be presented at L’ATTITUDE 2020. 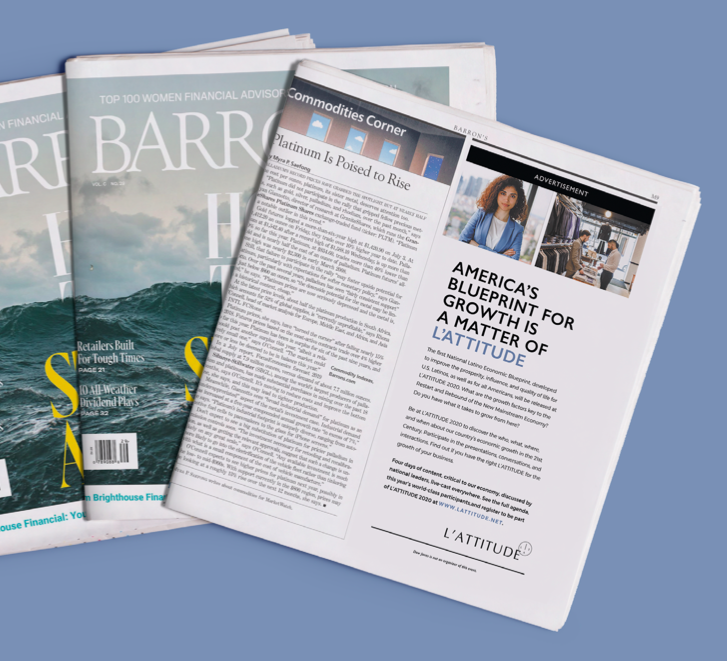 With over two-dozen sessions scheduled during four days of live-cast discussions, presentations, and interactions with some of our country’s most recognized leaders in business, finance, marketing, entertainment, and politics, L’ATTITUDE 2020 should be on everyone’s calendar September 24 – 27.

The complete agenda, and easy registration are available at www.lattitude.net.